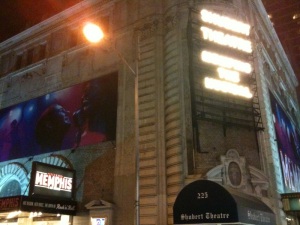 If you’re looking for a good time at the theater, Memphis may be just the show for you.

This slick and mostly entertaining new musical from the team that brought you The Toxic Avenger, centers on Huey Calhoun, a ne’er-do-well high school drop out who discovers his calling in promoting the rhythm and blues music of African-American singers, especially the beautiful and talented Felicia Farrell. Of course, Huey, who is Caucasian, falls in love with Felicia, and complications ensue.

Unfortunately, the musical is neither sensitive nor intelligent enough to handle these complications with the requisite depth, and this prevents Memphis from being a wholly satisfying musical theater experience.

Memphis belongs in a category of art led by “Mississippi Burning,” the 1988 film about civil rights, stories in which the white man gets a hefty amount of credit for a struggle he didn’t quite participate in. Memphis at least acknowledges this with passing references to the question of appropriation, as the basic story is one of white people finding success on black shoulders. On the whole, however, it feels overstuffed with broad simplifications and its only discernible theme or message is an uncontroversial plea for tolerance.

And yet, I had a great time. The production makes it pretty clear early on that, despite the seriousness of the subject, you are going to enjoy yourself watching it.

The pleasant but unremarkable score (David Bryan and Joe DiPietro) propels the show. There is hardly a moment without music, and it would take a stony heart not to groove a little in your seat. The book, by Joe DiPietro, is fast-paced and often funny, despite doing its fair share of pandering to an audience that is surely smarter than DiPietro assumes.

And the show boasts one of the most energetic and hardworking ensembles I’ve seen in a Broadway musical. They deliver Sergio Trujillo’s snappy and fun choreography with tremendous zeal and excitement. There are a number of fine dances peppered throughout, including one involving a group of girls jumping rope together, but Trujillo fails to seize many storytelling opportunities.

The production in general is upbeat and professional, but is often marred by a feeling of skimming the surface of what, frustratingly, must be a very deep pool. Characters are allotted their one emotion or conviction, as exemplified by the characterization of Delray, Felicia’s brother. He begins the show extremely protective of her and doesn’t seem to grow or change much in the course of its two and a half hour running time. This can be aggravating, since nothing Delray says ends up being all that surprising.

There is one standout performance in the piece, and that is Montego Glover as Felicia. The show only truly engages when she’s at its center, as in her first act dramatic number, “Colored Woman,” when she lets loose and bemoans a society that teaches African-American women not to dream.

But Huey (Chad Kimball) can’t seem to stop himself from stealing her thunder–despite vowing to make her successful–and it is his character that drives much of the action. His is a highly mannered form of showmanship, but he seems to hold the audience in the palm of his hand and received an enormous ovation at the close of the evening.

It’s always a pleasure to hear Cass Morgan sing, even if her character’s jump from stereotypical racist to beacon of tolerance is unsatisfactorily charted.

Musicals do tend generally to be light and upbeat and you can’t be too upset when one succeeds at being so. However, Memphis tackles a subject—broadly, American racism—that I feel deserves a little more nuance than the authors achieve. Nevertheless, the evening is an enjoyable one. I just wonder if you should leave a musical on such a heavy subject, turning to your companion and saying, “Boy, I had a terrific time.”

Peter Duchan is a playwright-screenwriter whose works have been screened at the Tribeca, South by Southwest, Gijon International, Brooklyn International, and many other film festivals.  He was raised in Westport, CT and currently lives in Manhattan.  He graduated from Northwestern University.

Peter was the winner of our September Memphis ticket giveaway.

Interested in guest reviewing a Broadway musical for the blog? Shoot me an email. I’m looking to assemble a great group of reviewers.

3 thoughts on “Memphis: A good time at the theater (A guest review by Peter Duchan)”