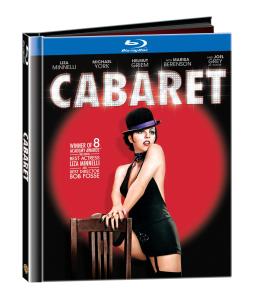 It’s giveaway time once again and this time we’ve got a copy of the new 40th Anniversary Blu-Ray of Cabaret to give away (if you missed it, check out our review of the Blu-Ray here).

In honor of the upcoming Oscars (and the incredible 8 awards this film won at the 1972 Academy Awards), comment with who you think most deserving of an Oscar for their work on the film. Bob Fosse? Liza Minnelli? Joel Grey? Michael York? The cinematography? The art directors? The makeup designers? Should it have beat out The Godfather for Best Picture?

Can’t wait to hear what you think.

Congratulations to Gaby, the winner of the 40th Anniversary Blu-Ray Version of Cabaret!

If you aren’t Gaby but still want a copy of the Blu-Ray, you can purchase it from Amazon now!

Thanks again to everyone who entered. We’ll have another contest coming up on the blog soon, so if you haven’t yet, be sure to to subscribe via email or RSS to ensure you don’t miss the next contest.

The winner was chosen at random from all comments using a random number generated by random.org on February 20th at 5 pm EST.

The Broadway Musical Home was furnished with a complementary copy of this Blu-Ray for this contest, but was not paid to endorse this product in any way.