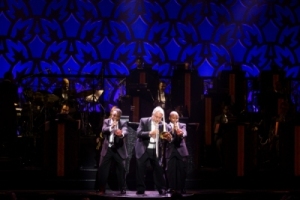 It’s been a while since a musical revue got universal praise from critics, but After Midnight, the latest of the genre, couldn’t have received stronger reviews. Featuring incredible music and dancing – this tribute fully embraces the style of its original source to deliver a nearly perfect show that celebrates the undeniable talents of the singers, dancers and musicians on stage. And though all deliver excellent performances, the stars of the show are unmistakably the  Jazz at Lincoln Center All-Stars, who capture Ellington’s style to a t, leaving audiences smiling, tapping their toes and singing After Midnight’s praises.

“The band takes the last bow in “After Midnight,” the sparkling new jazz revue that opened at the Brooks Atkinson Theater on Sunday night. This may be unusual for Broadway, where the players are normally in the pit — and the music often sounds as if it could have been piped in from Hong Kong — but it’s entirely as it should be.”

“Though Duke Ellington and his orchestra had further uptown destinations in mind when they advised nightlife-seeking denizens to take the A train, Broadway patrons seeking a luscious sampler of the music and styles that flourished in venues like The Cotton Club, The Savoy and The Sugar Cane during that golden era known as The Harlem Renaissance needn’t travel further north than 47th Street, where the Brooks Atkinson Theatre is jumpin’, stompin’ and downright roof raisin’ with the sounds of Ellington and his contemporaries in a dazzling showcase of talent christened After Midnight.”

“There are few things that bring smiles to even the most jaded faces — balloons, blaring trumpets and tap dancers. A new Broadway revue has two — no, make that all three — so no wonder it leaves you feeling lighter than air.”

“The paramount requirement for any revue celebrating the Harlem Renaissance of the 1920s and ‘30s is stated right there in the Duke Ellington standard, “It Don’t Mean a Thing (If It Ain’t Got That Swing).” And After Midnight has it in abundance, courtesy of a superlative jazz orchestra handpicked by producer Wynton Marsalis from among the best in the business. Ninety minutes of exuberantly entertaining song and dance, this is a show that renders it impossible to keep your toes from tapping. Up first in a series of rotating special guest stars, Fantasia Barrino with her luscious vocals sets the bar high.”

“After two sold-out runs at City Center, “Cotton Club Parade” has shed its original name (licensing issues!) and transferred to Broadway. Now with the smokier, more evocative title “After Midnight,” the moody homage to Duke Ellington opened Sunday at the Brooks Atkinson Theatre.”