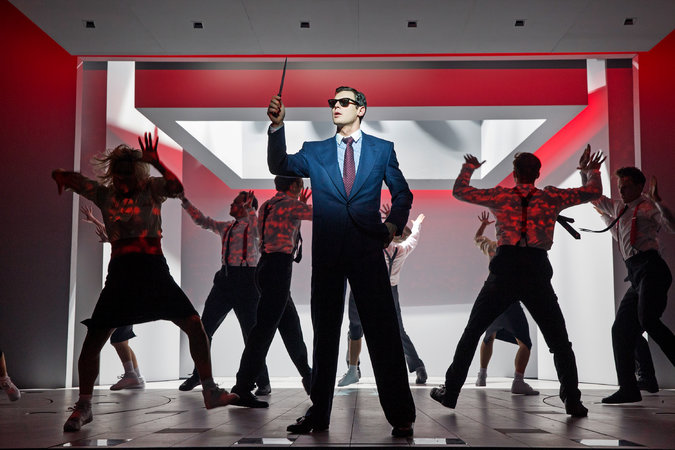 American Psycho has opened, and while the critics all applaud the nostalgia-inducing ’80s design and impressively sexy ensemble, it’s hard to fall in love with the show itself – and not because of the devilish story. Based on the infamous 1991 novel by Bret Easton Ellis, this new musical attempts to translate a complex, psychological thriller to the stage: Duncan Sheik’s score features synth pop hits from the 1980s and director Rupert Goold creates a stylized world that’s, in different instances, robotic and primal. The performance that stands out is Benjamin Walker as Patrick Bateman, who is the central psycho and the one who holds it all together. Overall, this musical story of America’s favorite killer won’t captivate the world like the novel, but it surely offers something you won’t find elsewhere on Broadway.

Though it is spattered with stage blood from beginning to end and features the sort of carnage associated with Eli Roth movies, “American Psycho” turns out to be one of those musicals that send your thoughts awandering, even as you watch them. So while this show’s title character (played by Benjamin Walker in…

Tired of all those idiotic millennials with their sappy nostalgia, trying to pass off the 1980s as something more than a spasm of shame and revulsion? Then American Psycho is the show for you, bringing the ruthlessness of a serial killer in an orgiastic bloodbath to its depiction of the decade that annihilated…

As Wall Street banker Patrick Bateman in “American Psycho,” the charismatic Benjamin Walker first appears in a tanning booth, stripped to his underpants, his muscles smooth and gleaming. He looks like a doll in a box, complete with accessories: status-symbol 1980s cosmetics and clothing that he meticulously…

Benjamin Walker wears clothes and almost no clothes with equal elan in “American Psycho,” the blood-spattered, label-obsessed musical that opened on Broadway tonight. Perhaps the star has a thing for blood; it was, after all, his gleefully free-form performance in “Bloody Bloody Andrew Jackson” that put him on…

With its wicked wit, catchy ear candy and sexy cast, “American Psycho” gives you a killer buzz — for a while. Euphoria sinks once corpses pile up in this glossy new Broadway musical. Based on Bret Easton Ellis’ controversial 1991 book, the story follows Patrick Bateman, a Wall Streeter and mass murderer, through…

My Tweets
Do Not Sell My Personal Information