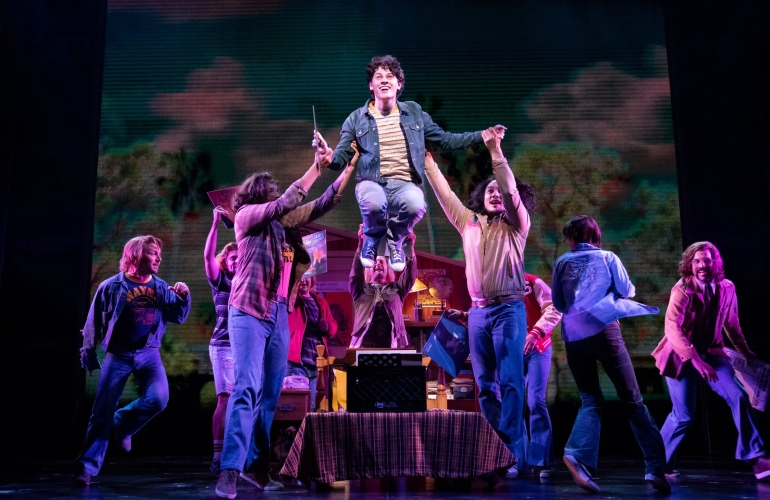 Yikes. Critics didn't care for Almost Famous, the latest film-to-stage adaptation to hit the Great White Way. With pandering over-the-top jokes, a not-at-all-adapted for the stage story, and abysmal lyrics, set and staging, the only saving grace were standout Broadway premiere performances by Casey Likes and Solea Pfeiffer. Overall, critics wished this production had leaned in to truly adapting the show for the stage, rather than creating a semi-original half-jukebox musical rehash of the film.

The reviews for If/Then are officially out -- if you like Idina Menzel, then you'll probably like this.  On the whole, though, the critics are fussy about this new musical.  Some say the plot is too simple, maybe even unoriginal, while the message is muddy and unclear.  It seems the critics just expect more from…

END_OF_DOCUMENT_TOKEN_TO_BE_REPLACED

The reviews for the Green Day album-turned-musical, American Idiot, have come out and  critics were quite pleased with the production, with a few reservations. Some called it the best musical of the season (and even of the 21st century), while others were a bit more discerning - pointing to a thin plot covered up by…

END_OF_DOCUMENT_TOKEN_TO_BE_REPLACED

Next to Normal has officially won the 2010 Pulitzer Prize for Drama, lauded by the jury for "expand[ing] the scope of subject matter for musicals." The musical joins the ranks of Of Thee I Sing, South Pacific, Fiorello, How to Succeed in Business Without Really Trying, A Chorus Line, Sunday in the Park with George…

END_OF_DOCUMENT_TOKEN_TO_BE_REPLACED

Bring it On: The Musical is an adaptation of the smash Hollywood film of the same name. With direction/choreography by Andy Blankenbuehler (In the Heights, 9 to 5, The Apple Tree), a book by Jeff Whitty (Avenue Q), music by Lin-Manuel Miranda (In the Heights) and Tom Kitt (Next to Normal, 13, High Fidelity), lyrics…

END_OF_DOCUMENT_TOKEN_TO_BE_REPLACED

Okay, okay so they may not have announced plans to take the show to Broadway just yet, but I just have to share this one: Berkley Repertory Theatre is premiering a stage adaptation of Green Day's Grammy-winning multi-platinum album American Idiot. Yes - album concept to stage a la The Who's Tommy. I personally adore…

END_OF_DOCUMENT_TOKEN_TO_BE_REPLACED

The Dramatists Guild of America announced Tom Kitt as the recipient of this year's Frederick Loewe Award for Dramatic Composition for his score for Next to Normal. Have you bought the CD or seen the show yet? You really should - it's amazing. The other Dramatists Guild Award recipients for this year are David Ives, Polly Pen and Lanford Wilson.