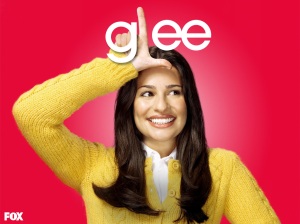 If you follow this blog and somehow haven’t become a Gleek yet, I can’t understand why not.

The show, which stars Broadway favorites Lea Michele and Matthew Morrison, has already featured Broadway big-shots Victor Garber (Sweeney Todd, Assassins, Damn Yankees), Kristin Chenoweth (Wicked) and Debra Monk (Curtains, Chicago, Company) and  showtunes like “Maybe This Time” from Cabaret and “I Could Have Danced All Night” from My Fair Lady.

Broadway Gleeks can continue to get more excited: Lea’s Spring Awakening co-star, Jonathan Groff, has signed on to perform in at least 5 episodes of the show,

The show’s tunes are hidden a little better than its stars, but thanks to YouTube, we do know that we’ll be hearing Lea Michele and Chris Colfer singing “Defying Gravity” from Wicked. Check out a clip of the song:

Glee just keeps getting better and better for lovers of Broadway musical theater!

3 thoughts on “More Broadway showtunes and stars are in store for Glee!”