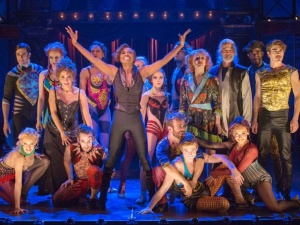 The reviews are in for Pippin, the final show to open on Broadway this season — though the story for the show is as thin as the set’s tent poles, the lavish acrobatic spectacle and over-the-top performances have hardily won over the reviewers. Fosse’s choreography may have been the starting point, but it’s the combination of talented acrobats from Montreal and big Broadway stars that will give audiences front row seats to both a Broadway musical and a circus that make this revival so appealing. So get ready for some oohs and ahhs and get in line – you’ll get your money’s worth from this production.

“What do I have to do to make you love me?…the question has seldom been posed as nakedly and aggressively as it is in Diane Paulus’s revival of Pippin, which opened on Thursday night at the Music Box Theater. Perhaps you’re tired of the plain old song and dance that many big-ticket shows give you. The performers in this hard-driving production of Stephen Schwartz and Roger O. Hirson’s 1973 musical can of course sing and dance (and “in the style of Bob Fosse,” to boot, as the program puts it.) They also hang from their toes from perilous heights, fly through the air, balance on wobbly towers…these folks will jump through hoops for you, literally, and the hoops keep getting higher and higher. As for the 99-pound that at the center of this muscle-bound circus…it’s there, too, if you choose to look for it. And if you choose not to, that’s fine…Ms. Paulus’s Pippin is in its way a natural extension of Fosse’s [original 1973 production], pushing the musical from seduction into sensory assault. This is a Pippin for the 21st century, when it takes more than style to hold the attention of a restless, sensation-hungry audience…And I would argue that in courting to its audience, this Pippin is ultimately more cynical than Fosse’s…Of all the cast members who aren’t acrobats, though, it’s the veteran comic actress Ms. Martin who truly scales the heights…[This is] crowd-pleasing show business as usual.”

“The last show to open this season on Broadway comes with plenty of bang, lots of flips and real value for money: A ticket buys you not just a musical but also a trip to the circus. The American Repertory Theatre’s thrilling revival of that coltishly cute Pippin opened Thursday at the Music Box Theatre as a hybrid that surely will keep everyone thoroughly entertained. Director Diane Paulus hasn’t just slapped some fresh paint on this beloved tale of self-discovery, she’s rebuilt it…Paulus has transformed the players into a troupe of circus performers, and it’s a stroke of genius…The cast members are amazing and clearly have all been to the gym. No sooner have you realized that one actor is busy stealing the show than another steps up to blow you away….the Gypsy Snider-led acrobats will thrill you…So when the cast sings, by way of invitation the eh opening number, ‘Join us, come and waste an hour or two,’ it’s highly recommended you do so. Little can get the blood going this way.”

” **** out of four – the final and best musical production of this season…Schwatz’s score [is a] richly melodic mélange of pop and jazzier musical theater influence, and Bob Fosee’s original choreography, a dazzling parade of controlled carnality. Paulus, working with Fosse protégé Chet Walker and Gypsy Snider of the Montreal-based troupe Les 7 doights de la main, adds to that mix a circus element, incorporating acrobatics, sword-throwing and other, often comical evocations of derring-do. The result is a combination of epic theater, burlesque and soulful spectacle that recaptures the show’s shiny allure and its poignance while making it seem entirely fresh. The flawless company is led by Patina Miller as the Leading Player…and Matthew James Thomas as Pippin, The young stars work beautifully as both partners and foils. Other standouts include a lusciously limber Charlotte d’Ambroise, as Pipin’s scheming stepmother, and Andrea Martin, who nearly strops the show as his preternaturally perky – and movingly devote – grandma…This Pippin also offers a new ending, with a twist that provides all the ‘thrills and chills’ the Leading Player promises us earlier. By that point, she and her colleagues have delivered all the magic they guarantee in the opening number, and then some.”

One thought on “The Reviews for Pippin are In…”