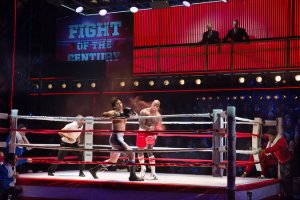 The reviews for Rocky are in and though the show has source material rich in content, characters and cult-followers, it seems no number of scenic or technical punches could ultimately save this musical from itself. The songs are unmemorable at best, and inane at worst, and the show seems so intent on steering clear of camp that it instead borders on lifelessness. That said, the musical does hold true to its source material and critics universally agree that the final fight might be worth the cost of your ticket alone.

Did you see the show? What did you think? Tell us in the comments!

“The official curtain time for Rocky, the new musical at the Winter Garden Theater, is 8 on most nights. But at the risk of promoting tardiness among theatergoers, I feel obliged to point out that the show doesn’t really get started until 10:10 or thereabouts. That’s when a production that has seemed to be down for the count since the opening bars of its overture suddenly acquires a pulse. And the audience wakes out of a couch potato stupor — the kind you experience when you have the television tuned to an infomercial station — to the startling tingle of adrenaline in its blood. Of course, by that point, it’s all over but the fighting.”

“In the case of Rocky, let’s begin at the end. The electric final 15 minutes of the new musical based on Sylvester Stallone’s small-town Philly boxer, now open at the Winter Garden Theatre, are likely to inspire a heavy outpouring of adjectives: Game-changing. Jaw-dropping. Astounding. All are fair. Preceding the high-voltage conclusion—a round-by-round battle between the idealistic Italian Stallion and world champ Apollo Creed that makes use of the theater space in a quite novel way —is an otherwise-workaday musical buoyed by enough built-in goodwill to lift it up the stairs of the Philadelphia Museum of Art, and beyond.”

“The musical version of Rocky is a technical knockout. Christopher Barreca’s wondrous set features a regulation-size ring that rises, falls, and pivots to become a screen. Then, during the spectacular final fight, it slides out over the first eight rows of seats, and theatergoers are escorted to onstage bleachers that moments before doubled as the iconic stairs of the Philadelphia Museum of Art. In the viscerally realistic bout, choreographed by Steven Hoggett, peacocking champ Apollo Creed (Ragtime’s Terence Archie) and our palooka of a hero (The Mystery of Edwin Drood’s Andy Karl) make actual contact. No jazz hands, no kick lines, and the only singing comes from an unseen chorus reprising (of course) ”Eye of the Tiger.” ”

“How can you not burst into laughter when Rocky optimistically sings about how, despite all his troubles, “my nose ain’t broken”? Seriously, that’s the lyric. Based on the 1976 Sylvester Stallone film about Philadelphia boxer Rocky Balboa, expectations for this new musical have been very high. It premiered last year in Germany, where it was known as Rocky: Das Musical. The young and innovative Alex Timbers (Here Lies Love, Peter and the Starcatcher) is directing.”

“”Nobody leaves the theater humming the scenery.” That old Broadway wisecrack, often attributed to Richard Rodgers, implies that no amount of eye-popping visuals in a show can overcome an unmemorable score. Rocky may be the exception. While the songs in this musicalization of the career-making 1976 Sylvester Stallone movie come and go without leaving much of an impression, the stage magic that director Alex Timbers and set designer Christopher Barreca work with the finale fight is so visceral and exhilarating that it sends the audience out on a high. Of course, having an indestructible story with underdog characters worth rooting for doesn’t hurt either.”