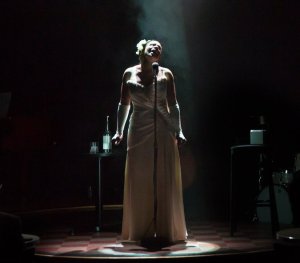 Few shows garner overwhelming critical applause like Lady Day at Emerson’s Bar and Grill, and few performers command undeniable respect and admiration like Audra McDonald.  The musical, now playing at Circle in the Square, shows Billie Holiday (McDonald) in a fictional final concert near the end of her hard-fought, tiresome life.  The glory of this production rests in Audra McDonald’s performance; it’s not only that she completely captures Holiday’s late-life sound and spirit, it’s also that some critics admit to once questioning her casting in the piece!  Rest easy, those critics eat their words in the very same sentence.  McDonald is, without a doubt, one of the most revered and captivating Broadway stars, and any doubters need only snatch tickets to this thoughtfully-staged and unforgettably-performed musical to experience the majesty for themselves.

“When Billie Holiday sang, history attests, her audiences tended to clam up. Even in the bustling nightclubs where she mostly performed, Holiday often insisted on total quiet before she would open her mouth. The quiet usually held, as one of the great singers of the last century turned jazz songs and standards into searching, and searing, portraits of life and love gone wrong that cast a shimmering spell. When Audra McDonald takes to the stage and pours her heart into her voice in Lady Day at Emerson’s Bar and Grill, a similar sustained hush settles over the Circle in the Square, where the show opened on Broadway on Sunday night for a limited run. With her plush, classically trained soprano scaled down to jazz-soloist size, Ms. McDonald sings selections from Holiday’s repertoire with sensitive musicianship and rich seams of feeling that command rapt admiration.”

“Lady Day at Emerson’s Bar & Grill, Lanie Robertson’s elegiac lament for the jazz singer Billie Holiday at the end of her broken-down life, has been knocking around forever in regional theaters. But in all those years, this intimate bio-musical was waiting for a great singer like Audra McDonald to reach out and bring this tragic figure back from the grave. There’s an uncanny immediacy to this production, which helmer Lonny Price has shrewdly staged in the round, with theater patrons sitting and sipping drinks at little club tables while bearing witness to the final days of a lost Lady. The ungainly stage at Broadway’s Circle in the Square has proved an inspiration for set designer James Noone to recreate Emerson’s Bar & Grill, the seedy joint in North Philadelphia where Billie Holiday played one of her last club dates in 1959, three months before she died.”

“Audra McDonald has done it again. In Lady Day at Emerson’s Bar & Grill, a new Broadway drama imagining a late-in-life concert by the great jazz diva Billie Holiday, McDonald delivers a mesmerizing performance that is not so much an act of mimicry or even impersonation as it is a transformation. A record-breaking sixth Tony Award seems like a foregone conclusion. While McDonald’s vocal inflections can seem a tad overstudied in the show’s opening number, ”I Wonder Where Our Love Has Gone,” as she spits out breaths at the end of each musical phrase, the actress quickly settles into the role and erases all memory of her operatic belter’s soprano and her naturally bubbly personality. In their place: a voice both smoky and breathy, and a demeanor that suggests a hard-lived life in the first half of the 20th century. ”

“Only a fool would second-guess the transformative power of Audra McDonald, but when it was announced that this five-time Tony Award-winner was going to portray Billie Holiday in the Broadway production of Lady Day at Emerson’s Bar & Grill, I must confess that I had my qualms. When one recalls Holiday’s sublimely ruined sound at the end of her career, the period in which Lanie Robertson’s concert drama is set, one doesn’t think of McDonald’s soaring, Juilliard-burnished soprano, a gold medal voice still in its athletic prime.”

“It’s Audra McDonald’s world—we’re all still just living in it. For proof, swing by the Circle in the Square, where the reigning Queen of the Rialto holds court in Lady Day at Emerson’s Bar & Grill, a late addition to this season’s Broadway calendar that showcases McDonald as jazz singer Billie Holiday. Over 90 minutes, McDonald interprets more than a dozen of the combustible artist’s recordings, among them “God Bless the Child” and “Strange Fruit.” The setting, a theatrical conceit, is a small bar in South Philly during spring 1959, a few months before Holiday will succumb to cirrhosis and heart failure.”

“Audra McDonald’s luxurious soprano with thoughtful lyric phrasing may not be the first voice that comes to mind when drawing comparisons to the emotionally thick, laconic blues of Billie Holiday. But then, Lanie Robertson’s 1986 theatre piece, Lady Day at Emerson’s Bar and Grill, despite its inclusion of over a dozen Holiday-recorded standards in a 90-minute performance, is not merely a re-creation concert. It’s a drama about how a great artist’s self-destruction permeates into her art, and for that, an actor of McDonald’s high caliber is certainly required. Robertson’s inspiration for the play came when a boyfriend described for her a 1959 Holiday performance he attended in a little North Philadelphia dive, roughly three months before her death. It had been twelve years since she served jail time for drug possession and though she had sung at Carnegie Hall and appeared on Broadway since then, New York City’s refusal to grant her a new cabaret license prevented her from doing what she loved best, singing in Manhattan nightclubs.”