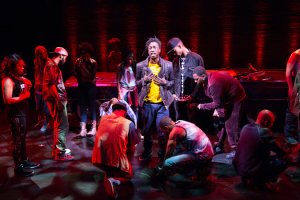 The reviews for Holler If You Hear Me are in, and unfortunately the critics don’t think anyone will holler for this new jukebox musical based on songs of the late rapper Tupac Shakur.  The critics almost universally recognize the power of Tupac’s lyrics and the strength of the song performances, but they can’t get past the poor story and over-emphasized presentation.  Recent Tony-winning director Kenny Leon leads the charge and seemingly isn’t confident that the public can pick up on the themes of the story.  The result is an “overwrought” and “well-intentioned but toothless” musical about life on the streets, violence, hard knocks, and second chances.  Critics believe that it may leave fans of Tupac unsatisfied and fans of Broadway wondering “…why?”.  It’s true that Broadway is due for a hip-hop musical that will set the industry ablaze, but unfortunately Holler If You Hear Me doesn’t seem to be the one.

“The beats are sweet, and the words often have an electric charge in Holler if Ya Hear Me, a new Broadway musical inspired by the lyrics of the popular but troubled rapper Tupac Shakur, who was shot and killed at 25 in Las Vegas in 1996. Unfortunately, much else about this ambitious show, which opened on Thursday at the Palace Theater, feels heartfelt but heavy-handed, as it punches home its message with a relentlessness that may soon leave you numb to the tragic story it’s trying to tell. Written by Todd Kreidler and directed by Kenny Leon, a Tony winner this year for the revival of A Raisin in the Sun, the show admirably yanks the jukebox musical, which has mostly been mired in the hit parade of the baby-boomer years, into the last decade of the 20th century. It was then that Shakur’s raw, propulsive music struck a powerful chord, especially among disaffected black (and white) youth living in poverty amid explosive violence, while America was supposedly firing on all economic cylinders.”

“It’s a safe bet that a swath of theatergoers has steered clear of hip-hop—at least, the kind not scripted by In the Heights composer Lin-Manuel Miranda—because it’s gritty, racy and has a perception problem in some quarters. If that’s you, then Holler If Ya Hear Me, the Broadway musical “inspired by” the lyrics of Tupac Shakur, is a chance to correct a grave omission. If, however, you’ve been on the Tupac train all along, then Holler, which has just opened at The Palace Theatre, is a banner opportunity to stand in awe of a rich canon that, it’s difficult to grasp, originated with a man who died at only 25.”

“In theory, hip-hop ought to have a bigger presence in mainstream music-theater by now: Broadway showstoppers have never been short on rhyme, syncopation or populist sentiment. Practice is a different matter. While there have been rap-rich musicals (In the Heights), the fusion of hip-hop and razzle-dazzle has been tricky at best, tacky at worst. The latest attempt is Holler if Ya Hear Me, a ghetto-not-so-fabulous repurposing of songs by Tupac Shakur (1971–96) for a ramshackle morality tale about revenge and second chances.”

“Broadway has had a punk jukebox musical with Green Day songs and one featuring harmonies by Frankie Valli and the Four Seasons. There’s a jukebox show with Abba songs and a new Carole King one. Now it’s time for rap. Holler If Ya Hear Me is the intriguing musical inspired by songs by Tupac Shakur, one of hip-hop’s greatest artists who wrote about the ugly life in the drug-fueled mean streets before dying of gunshot wounds in 1996. The high-energy, deeply felt but ultimately overwrought production opened Thursday in a blaze of N-words at the Palace Theatre, proving both that rap deserves its moment to shine on a Broadway stage and that some 20 Shakur songs can somehow survive the transformation — barely.”

“John Singleton can relax. Any danger of his long-in-development Tupac Shakur biopic being beaten to the punch by Holler If Ya Hear Me is quickly dispelled by the deflating experience of this well-intentioned but toothless Broadway rap musical. The show is not a biographical drama but a story of friendship and family, gun violence, racism and redemption in an inner-city black neighborhood, inspired by Shakur’s lyrics and poetry. However, therein lies the problem. The music is often powerful and the performers uniformly capable, but the songs are a poor fit for narrative presentation, at least in writer Todd Kreidler’s cut-and-paste of cliched situations and stock characters.”