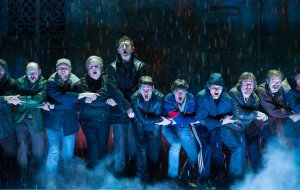 The reviews for The Last Ship are in, and while this dramatic musical may leave you with a rousing, working-man’s ballad in your brain, it may also leave you struggling to describe the plot to your friends.  The new musical, featuring songs by Sting, transports audiences to a once-great shipbuilding town in northern England.  The scenery and effects create a bleak environment that epitomizes the attitude of the frustrated townspeople – matching the fervor with which the cast struggles.  The problem isn’t the music or direction or choreography or scenery, though – it’s the story.  With numerous characters playing major roles and questionable and/or predictable plot machinations peppered throughout, it’s easy to fill disengaged.  The musical is certainly unique on Broadway right now and the capable cast certainly conveys the story with conviction, but with an underachieved storyline, it’s a bit tough to wholly recommend The Last Ship.

“Hard times, blighted lives and the bleak humor that occasionally lifts the fog: The universe of The Last Ship, the new musical with a score by Sting about a shipbuilding town in decline, lies at some distance from its peppier neighbors on Broadway, where megaphoned uplift and easy escapism tend to thrive. For that rea…”

“To use shipbuilding as an analogy for crafting musicals, the songs are the hull—the most visible part of the thing, taking up the most space. But you won’t sail far without a strong, even keel, the beam around which the hull is constructed—the book, in other words. With The Last Ship, a fervent, rollicking…”

“You may be tempted upon leaving Sting’s Broadway musical The Last Ship to head straight to a pub to drain a pint and sing some sea shanties. Or maybe go weld something. Or do both. Such are the foot-stomping, testosterone-filled feelings that emerge from the Neil Simon Theatre, where a blast of British working…”

“The biggest selling point of The Last Ship is also its greatest stumbling block: multiple Grammy winner and Tantra enthusiast Sting, who provides the music and lyrics to his first-ever Broadway show. Fans hoping for the same pop sensibility that turned ”I’ll Be Watching You” and ”Desert Rose” into hits wil…”

“He may not appear onstage, but there’s no mistaking the voice of Sting in both wistful balladeer and rousing reveler modes in his stirring score for The Last Ship. Set against the demise of the shipyards in the composer’s hometown of Wallsend in North East England, this melancholy musical is without doubt…”