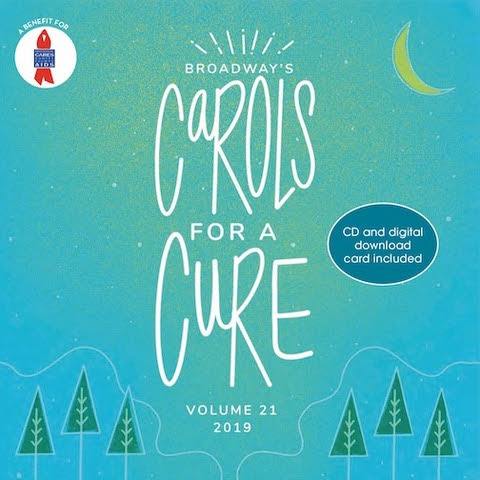 Since 1999, Broadway Cares/Equity Fight Aids has released 21 editions of its annual Broadway Carols for a Cure album. In keeping with the organization’s mission, the proceeds of Carols for a Cure (in addition to BCEFA’s other fundraisers like Broadway Bares) go to the fighting of AIDS and the support of people living with AIDS in America. The series is known for featuring the casts of popular Broadway musicals performing their own exciting interpretations of holiday songs. Featuring the casts of Hadestown, Mean Girls, and Frozen, this year’s Carols for a Cure Volume 21 is no exception.

The album opens with “Carol of the Bells” by the cast of Beetlejuice, which starts out traditional enough before an interruption from Alex Brightman’s title character turns it into a much more characteristic Danny Elfman-style romp (with a “Day-O” interpolation for good measure), before proceeding to include tracks like Barbra Streisand’s infamous “Jingle Bells” interpretation by the cast of Tootsie, and an all Yiddish performance of “Drey Dreydele” by the cast of Fiddler on the Roof.

Each cast brings the flavor of their respective shows to their selections (the cast of Temptations musical Ain’t Too Proud brings straight up soul to “O Come All Ye Faithful”, while the cast of Oklahoma! brings a full country vibe to “Auld Lange Syne”), as well as an expected sense of theatricality (like the spoken intro in Waitress’ hilarious “Secret Santa”).

Standouts here include the all-instrumental “A Prayer for Peace” by the Local 802 AFM Theater Musicians (who recently started an informational “Musicians of Broadway” website), and an irresistible jazzy cover of “What Child Is This?” from the cast of Hamilton. The latter trades the show’s signature rapping for beautiful piano solos but does it just as excellently, saving the rapping for another Lin-Manuel Miranda created show, Freestyle Love Supreme who flex their lyrical acrobatics on a track called “Christmas Tree”. The Dear Evan Hansen cast’s beautiful cover of “Hine Ma Tov/Together” uses that show’s own song “Only Us” as a jumping off point, a brilliant move that will make fans of the show instantly happy. The most recent winner of the Best Musical Tony Award, Hadestown, is saved for last here…and does not disappoint, with the cast’s haunting acapella interpretation of the lesser known “Midwintersong”.

The 18-song collection is a winning combination of diverse voices and interesting selections, whether they’re fun interpretations of instantly recognizable classics (like Mean Girls’ gender-swapped “Baby it’s Cold Outside”) or exciting arrangements of less-covered songs (like the Broadway Baby Mamas’ “Coventry Carol”). Ultimately, Broadway’s Carols for a Cure Volume 21 is another excellent addition to the holiday music canon from BCEFA’s enduring series, well worth its charity-bound $25 cost.

Duane is the newest addition to the Broadway Musical Home family, bringing his love for musical theatre to Broadway Musical Blog. A graduate of Duke Ellington School of the Arts and Hampton University, Duane has written articles for the Odyssey Online and Medium and is a staff writer for ComicBookResources.com. Duane is also an actor and director based out of the DC area. View all posts by duanerichards